Our church is looking to upgrade our WiFi access points from our current SonicWall AP’s. The normal attendance on Sunday mornings is 400. We currently have 6 access points spread out over two floors (2 downstairs and 4 upstairs). Mostly the WiFI is streaming videos from Right Now Media at small groups, Sunday School for children, or youth group.

The current experience with SonicWall has been horrible which has been in place for the last 6 years. Our budget for upgrading would likely be around 10K. I’ve read various post on here regarding Ruckus and Cisco Meraki but have no experience with either. Also, we do not have a have any IT employees on the current staff so outsourcing / minimal maintenance would be a critical factor.

What would be the best recommendations?

I would recommend Cisco Meraki as it will take away many of the complexities of managing a enterprise level Wifi network. Meraki will take care of network optimisations and security patching.

Eastview Church of 6,000, network managed remotely by just 2 IT Staff. Moved from an outsourced IT management setup.

Cisco Meraki works with thousands of customers in over 100 countries, including Penn Mutual, MIT, AUDI AG, and Deutsche Telekom

Another good option is Ubiquiti Unifi; which might be cheaper but not as automated as Meraki.

You didn’t mention your church name or location, but relying on a team that does a lot of church WiFi will greatly help you get the right solution; one that works at a reasonable cost. There are a number potential solutions and a number of us in this forum that can help you. Our team www.mbsinc.com, does this for churches nationwide and can most likely do it for you without requiring a site visit.

Norman had some of the same thoughts I did. We’re a little larger than you (2 services and a little over 1,000 total attendance on Sunday) and more spread out. We’ve got a 6 building campus and cover most of it with six Meraki A/Ps with no performance issues. Five A/Ps are MP-18s and the other in the Sanctuary is a MP-42.

I for one really appreciate the easy of configuring and managing this setup. We also have a Meraki MX-84 appliance providing firewall and other services. Having this all on a single dashboard and with all the alerts they provide is a bonus.

I see your using an MX-84 for your 1,000 attendance. I am researching Meraki for our 250-300 per gathering on Sundays. My vendor is recommending an MX-64. All the specs list only 50 clients. The MX84 says 200 clients. Has this ever been an issue for you? I want to right size the gear as best I can.

Short: We have a church of about the same size as you, as well as me personally being a CMNA-certified Meraki partner. Personally, because I get incredible deals on Meraki equipment and licensing, I got the MX84, but depending on your guest WiFi implementation, I don’t see any issues going with the MX64.

Longer: If you’re also getting Meraki MRs (we have four MR33s and four MR42s), the guest access stuff is largely handled at the AP. We have two “guest” networks, one called “Guest” and the other called “Teachers” (I didn’t chose them). Because we can set up DHCP, rate limiting, firewall rules, and traffic shaping at the AP based on SSID for clients on these networks, these sequestered networks don’t demand a lot of the security appliance. Clients on our third network, “Office,” which ties them in to the local network, have the rules applied at the network level by the MX.

If, however, you had some other solution, say VLANs with third party APs that don’t do anything but let people on a network that then has to be managed by the firewall, your more likely to see a performance hit on Sunday mornings. For what it’s worth, we see about 1/4 of our congregation use the wireless on Sundays (been slowly creeping up, and I’m hoping for more).

That’s all to say, depending on your usual attendee subscribers, and how much of a burdon your guests are to your MX on Sundays, it’s very likely that an MX64 is going to be just fine for you. Our Sunday usage isn’t much higher than any other day of the week. 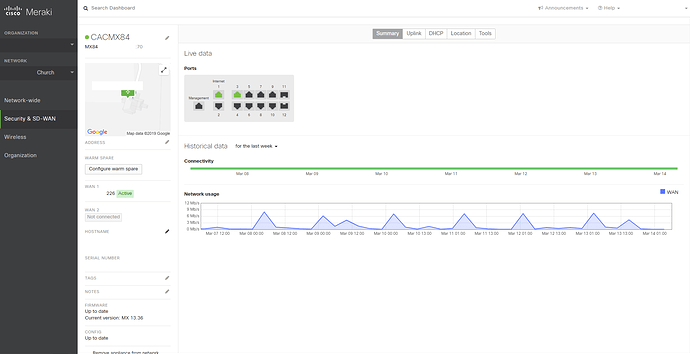 EDIT: I forgot to mention, we (day job, as a Meraki partner) frequently do 30 day trials of hardware. If you like it, you buy it, if not, just send it back. See if you can get an MX64 and however many APs you need, put them in, and see what it do!

It’s never been an issue. Now for your benefit I should add a few things
about our environment.

How excellent are the Lord’s faithful people! My greatest pleasure is to
be with them. Psalm 16:8