I figure this is a long shot, but worth a try…

I’m working on setting up three PowerEdge R730 servers to use Windows Server 2016 Storage Spaces Direct, but need at least two SSD drives per server (per Microsoft’s requirements) for cache.

As anyone who has purchased enterprise SSD’s is aware, they cost an arm and a leg and maybe another leg…

Wondering if anyone has a few enterprise SSD’s left over from an upgrade, etc. floating around they’d be willing to part with reasonably inexpensively.

Two of the servers will have MD1400’s attached, one will only have internal storage. The internal storage one can get by with 300-500 GB SSD, the other two Microsoft recommends 10% cache, but each of the MD1400’s clock in at 48 TB raw, which would mean 5 TB of SSD. That said, I think our use case will put significantly less strain on the storage than might occur in other situations so we can probably get away with significantly less…

We’ve had pretty good success getting off lease enterprise SSDs from eBay. I was able to pick up 400GB SSDs with 3 years of warranty left for $200/ea a few weeks ago.

Dave,
I don’t have any drives, but just some thoughts off the top of my head

I’m working on a similar setup as we speak and I was planning on using some Prosumer SATA SSD’s and just plan on replacing them at some point knowing that they won’t last as long as enterprise drives. I’ll you know how it goes.

I may be wrong, but I believe the Dell controllers will usually throw a flag saying that the disk is invalid if you use a non-dell specified SSD.

Dell controllers will usually throw a flag saying that the disk is invalid if you use a non-dell specified SSD.

I was just reading that. I’ll have to check a little more or try it with one I have on hand.

I’d would be very careful with non-Enterprise drives in a Dell server. The results could be unexpected such them dropping offline randomly. Once the “Dell” is added to the label the price does go up by what I feel is an unreasonable amount. We have seen very good results with the Intel DC drives. Same drives as Dell but without the Dell firmware or Dell label. They will have a yellow flag and will be noted as non-genuine in Dell’s tools.

Not sure about the warranty details of the off-lease equipment. Generally SSD warranties have an exclusion if the drive has been written to beyond it’s design. You could end with drives that a well used.

For cache disks it’s generally recommended to use write intensive drives which does add a lot to the price as well. If your workload is lighter you may be able to get away with mixed use drives but be aware that you risk wearing out the drives.

They do, observe below. Also, what’s interesting, the Intel SSD that is flagged is actually a supported one on Dell’s list. We’re working with Dell support to get it figured out right now.

With a “Dell” drive: 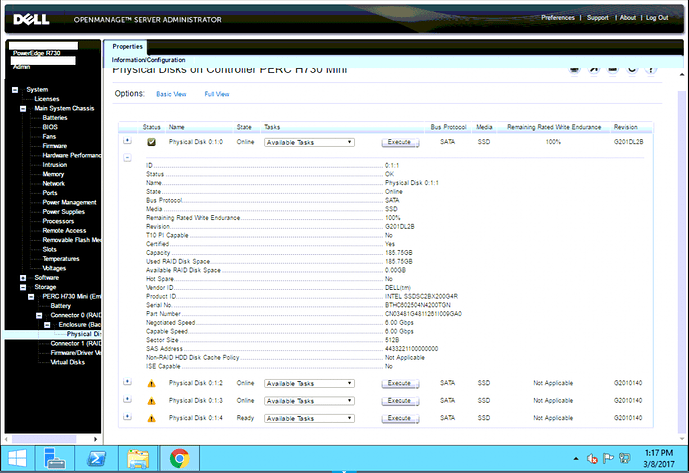 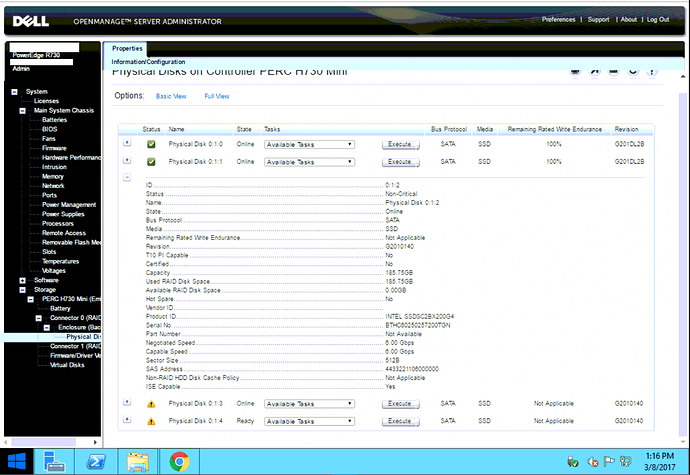 And that is the response I expect to get from them, but I figured I’d ask, as this particular client (I work for an MSP) got these drives and installed them themselves, and then came crying to us that there were the yellow flags.

I’ll let y’all know what Dell says about it.

Maybe if you told them you knew the location of the all spark?

We’ve had pretty good success getting off lease enterprise SSDs from eBay. I was able to pick up 400GB SSDs with 3 years of warranty left for $200/ea a few weeks ago.

Thanks Derek. I’ve looked a bit on eBay, but will continue to do so hearing you’ve had good results there.

Hmmm…I don’t remember seeing this as a requirement, I’ll need to look into this further.

I believe so, see: http://topics-cdn.dell.com/pdf/storage-md1400-dsms_user’s%20guide_en-us.pdf

I’m working on a similar setup as we speak and I was planning on using some Prosumer SATA SSD’s and just plan on replacing them at some point knowing that they won’t last as long as enterprise drives.

Jeremy - I was also interested in giving this a try, but the Storage Spaces folks at Microsoft have put out an interesting article explaining which we shouldn’t use prosumer SSD’s: 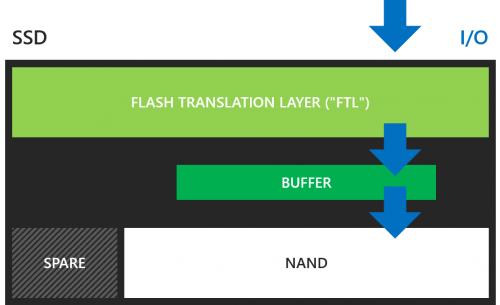 First published on TECHNET on Nov 18, 2016 // This post was written by Dan Lovinger, Principal Software Engineer. Howdy, In the weeks since the release of Windows Server 2016, the amount of interest we’ve seen in Storage Spaces Direct has been...

That said, I do think there are some prosumer SSD’s (very few) that offer this power loss protection functionality…

Hmmm, it’s always been our understanding that only drives with Dell’s firmware will be green.

From what I’ve seen, while the drives are the same, Dell uses their own revision of the drive firmware…I’ve seen some people attempting to flash the firmware on generic drives to the Dell firmware, but didn’t read closely enough to see if they had succeeded.

Thanks everyone for the thoughts!

I just looked and there are a few eBay listings for 400GB SSDs around $250/ea.

I ran across this the other day and I knew I bookmarked it for a reason: Buyer's Guide to getting a used datacenter SSD inexpensively

Thanks @Derek.VW for the heads up on eBay.

@EricE - Thanks, reading this now!

So after running through the whole thing, Dell’s response was the expected one. Even though the drives are compatible, there’s no way to get rid of the yellow exclamation marks in Openmanage.

Without the blessed “Dell” firmware, this will always be the case, regardless of where the drives are purchased from, even if you know the location of the AllSpark.

Thanks for the update @MagnaVis, unfortunate that Dell went this route.

If you drill down to what is creating the warning, it states something like “Not Genuine Dell.” This is accurate and, in my opinion, a good warning. We have seen cases where drives needed a firmware update or significant issues could appear. As the issue was specific to Dell RAID controllers, Dell had the update for the Dell branded drives much sooner than the OEM had the update for the same drive. I’m not at all opposed to having people run non-Dell enterprise grade drives in their Dell servers, but they need to be aware that that are some risks involved. Dell’s Openmanage is flagging that risk.

I have to disagree with you there, friend. I have the screenshots above, and nowhere in OM can I find a specific “This is why you have a warning” statement. It can be assumed by comparing drives lacking non-critical errors, but that’s not an excellent approach when you’re talking about your storage. I don’t want to assume, I want to be assured.

I don’t believe that vendors like Intel are literal weeks behind Dell on firmware releases. In my experience, Dell is consistently behind in driver and firmware updates. And their usurpation of the update tree often causes issues. For instance, I wanted to load a client’s engineering system that came with a Quadro card with the latest Nvidia driver. Nope, ‘you have to go to Dell for your driver’ page. When I did, the latest version was the one installed, from 2 years ago. What the heck, Dell?! That’s an expensive card, and I want it to support CAD 2016 with some of the newer features! If they had left it alone, I could get the drivers straight from Nvidia and this would be a non-issue.

Additional to that is the fact that I do system updates quarterly to servers anyway. Drivers, firmwares and BIOS don’t usually see frequent updates so it makes sense to me to have a cycle that is not taxing but also doesn’t adopt additional risk. Once every 3 months seems to be a good place to have landed for me and my clients where I’m not fussing with the servers and downtime every month just to do non-critical updates as soon as they are released while not leaving firmware in place that has known issues for an excessive amount of time. Even if Dell were 2 weeks earlier to the table with a firmware, it really wouldn’t make that much of a difference to me.

Further, I think that Dell has to wait for the official driver/firmware release to occur before adding their tweeks to it and re-releasing it as the “Dell” version. I can’t imagine Dell would replace the R&D branch that Intel already employs to make these changes in favor of their own team. That would be insane.

Finally, it’s in Dell best interest to have a list of supported devices. The drives in this system are literally identical to the “Dell” drives save for the firmware. This provides choice to the consumer. The problem would be that Dell has to prove a value to their drives over the direct manufacturers’ drive. On top of that, it doesn’t seem outrageous to me, that given the limited “approved” devices list, that OM would be able to watch for the same things it watches the Dell drives for. If you have 5 Intel SSDs that are on the approved list, and you can tell all the same info from them as the Dell drives, why produce a warning if the drives are fine? Dell ought to support drives that are considered approved, if they weren’t going to, what’s the point of an approved list to begin with?

I’m really only disagreeing to express my frustration with Dell and to more clearly convey my opinion on the matter; I really don’t expect to change your mind or see Dell make any policy changes. I just don’t see the “risk” you mention of running non-Dell drives, and think it’s in the best interest of the consumer and Dell to fully support “supported” devices on a system. Maybe if OM notified you once upon detecting a “non-Dell” drive and let you dismiss it without a persistent non-critical warning, that would be a good compromise.

After doing a little more research to justify what I said, I believe I found out I was misinformed by one of my higher ups. Late 2015 or early 2016, he told me he had heard from a reliable source regarding an issue where a Dell PERC card would issue non-standard SATA commands causing some Intel SSDs to go offline. He was told that Dell corrected their SSD firmware and Intel would follow. We had at least one customer with non-Dell Intel SSD’s that appeared to have exactly the issue described. We replaced the drives with Dell labelled SSD’s. We have not seen similar issue with Dell branded Intel SSDs.

Looking back at Intel and Dell firmware updates, I think what really happened is that Dell reported the issue to Intel and Intel released a fix in May of 2016 correcting the issue. https://security-center.intel.com/advisory.aspx?intelid=INTEL-SA-00050&languageid=en-fr. Dell followed with a firmware update in June of 2016 which had the fix “Addressed a rare condition that could render the drive unavailable or cause a pre-mature failure.”

It does make a lot more sense that Intel would fix the issue, not Dell. Never trust management. Or maybe it should be “trust but verify” what management tells you.

Weird on Openmanage. I don’t have any servers with Openmanage and non-Dell SSD’s running at the moment. In the past Openmaange has stated “Non Genuine” somewhere on the details. A like the idea of suppressing the warning by the customer. It’ll probably never happen though.

P.S. I do believe that updating the firmware on a non-Dell drive is going to be non-trivial.