We are planning on renovating one of our building and I would like to add digital signage to several areas. I want to hear feedback on the best practices for selecting a software or company for this purpose.
Thank you in advance!

Are you talking about in the building or street side outside?
Are you looking to create a loop of messages that will be broadcast through all signs, or the ability to feed different material through each of the digital signs?
Are you looking to broadcast or do something touchscreen interactive?

With most projects like this I always recommend starting at the end and working backwards, so list the goals (not features) of digital signage.

For example, common goals might be for the congregation to be aware of events on campus, for visitors to learn more about your ministry and the specific campus, etc.

Once the goals/purpose of the project is defined, you can start going into features, such as “centrally managed”, “works after a power outage”, “interactive”, or “Displays event data from our ChMS”.

Then you can start looking at options and budgets.

For us, BrightSign was a great fit for our needs and budget.

After that, there’s the whole TV hardware aspect as well, which the main goals should be to be remotely controllable, designed to stay powered on 24/7, and an accurate size/resolution for your needs.

There’s probably a lot that I’m missing, but this is how we looked into it.

Mark,
Sorry, I just now realized that I was not very specific as to where this signage will be. This is interior signage.
We would like to loop announcement slides as a way of publicizing upcoming events. I would like the ability to feed different material though each digital sign. Signage will be located in specific areas (i.e. youth, kids, young adults areas)
We are not looking to do touchscreen or interactive signs.
I was wondering if it was better to go ahead and get the all-in-one tv and signage players(i.e. Samsung) or should we buy TVs and the signage players separate (i.e. RiseVision)?

Second the recommendation on Bright Sign. We had tried DigitalSignage.com, but their boxes didn’t handle video well for us. We use Bright Sign for short videos, announcements, etc and they are reasonable priced and work well. If you want me to send you pictures of our “video wall” or the person we bought from email me at mhazelwood at gracechurchsc.org and I will email you some info.

Chris,
Thank you for your very helpful feedback. That is a great way to look at this and any other project.
I will have to say that our main goal is to make the congregation more aware of upcoming events. Our pastor would also like to have a specific area where we have a looping slides for our new members. Other members of our team have expressed interest in the interactive side of digital signage where visitors can find a directory and building map to find the class that is right for them. I, however, do not really see that as happing here at this time. Maybe in the future.

What type of TV hardware do you have?

One of them has the built in Samsung MagicInfo system, but it was more difficult to manage and wound up burning out. We now have a dead Windows XP machine built into the monitor, so we no longer have that monitor plugged into the network and just hang a brightsign box off of it.

We’ve been using Xibo (open source signage server) running in a VM on our server, with Intel Compute Sticks connected to various screens, which has worked pretty well. No real complaints.

If your church is anything like mine, they didn’t want to spend the money on commercial class display units, which they really should have. Instead they purchased consumer TVs. They work, but it typically voids (or severely shortens) the warranty if they are installed in anything but a private home. Commercial displays typically support 24x7 operation, scheduled power on/off, and have brighter screens.

Rise Vision looks good too. I’m thinking of giving them a try at another client, just to compare.

We use consumer TVs for signage and one problem we’ve ran into is that they randomly turn themselves off. I’ve never been able to track the issue down.

These are some pics from our Bright Sign units. 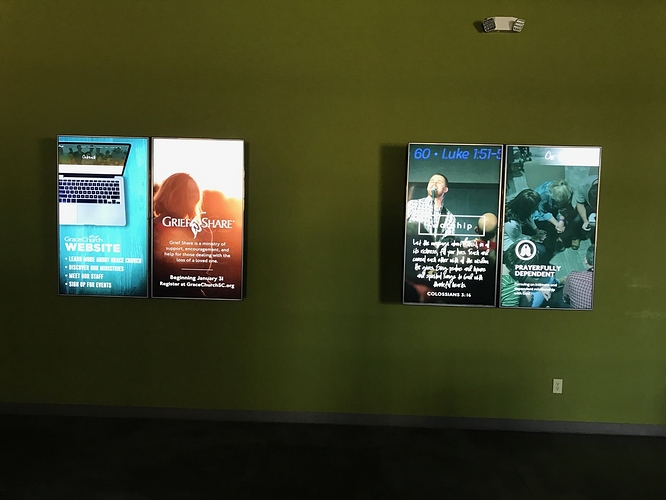 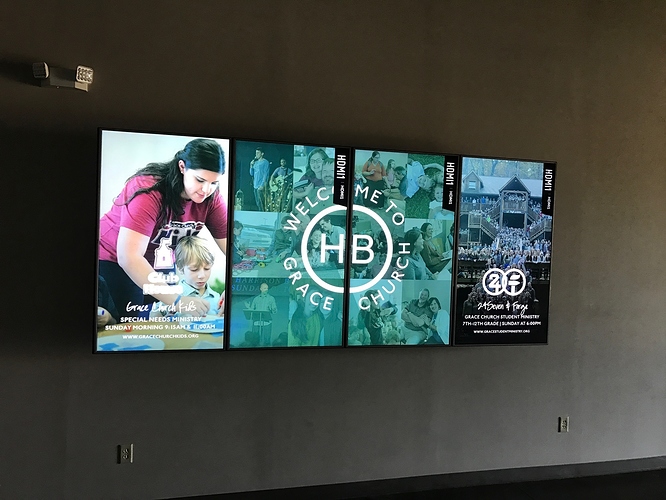 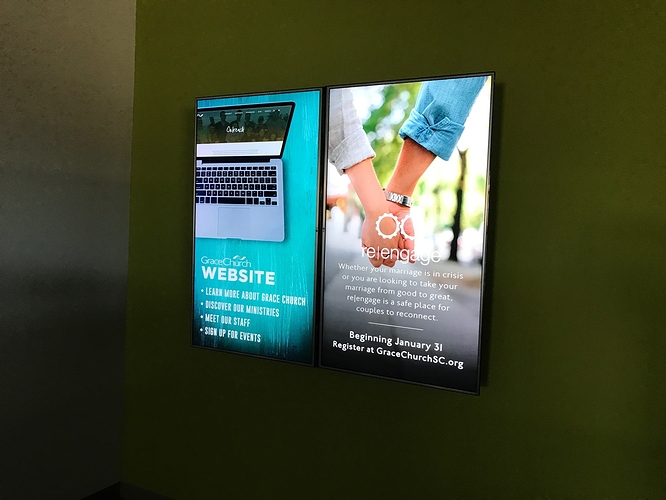 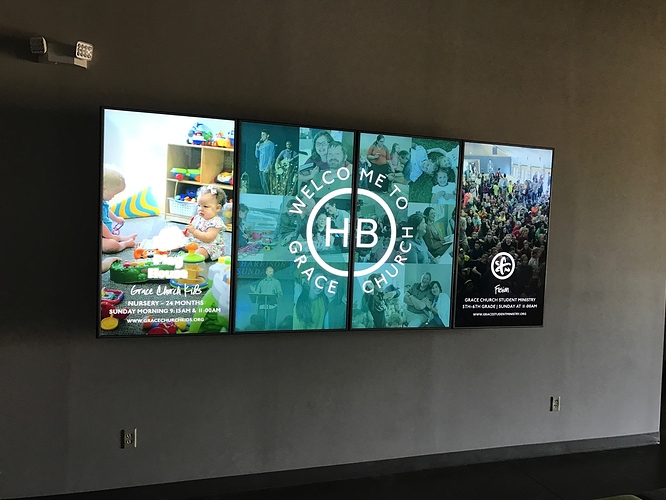 We have been looking at a system too, we have been reviewing Mvix, which is a web based system that updates devices on each display, upfront cost is a little high, but no ongoing expense each year. Has anyone seen or used this system?

I wanted to hop in and ask about using Google Apps solution?

Has anyone tried using this? Seems fairly straightforward and with using an $80 Chromebit only cost would be $25 per TV per year ongoing.

We are currently an Office 365 user so not sure what Domain I would tie a google apps account to though.

I recently attended the Ohio tech conference for schools, and they used Chrome Sign Builder for signage throughout the conference, and were very pleased with it, both price and performance. The rub though is the need for a business type Google account to manage the devices. Since many schools already use Google Apps for Education, Chrome Sign Builder is a natural fit.