We have always used FMLE for live streaming our outdoor/remote events (Good Friday, Easter, 4th of July, etc). For the past 3 years the video crew we hired brought a tricaster that we just configured for the live streaming which worked, but had worse audio (for some reason the Tricaster in question didn’t support AAC audio).

I’m tempted to just build another streaming PC like we’ve done in the past, but try to find an HDSDI encoder card that will allow us to break the feed into multiple streams (we typically have 4 or 5 bitrates I believe) to send to our CDN (limelight).

At our main campus, we use a StreamZ HD that simply generates all the HLS files and transfers them to a server over FTP that limelight pulls from.

I feel I have 3 options:

I have pro’s/con’s for each, but what are your thoughts? What do you do when you need to stream high quality from a venue that has decent enough internet but no streaming hardware?

For me, the mac/wirecast solution would be the way to go. However, I had heard of a company called boxcast back in the day. 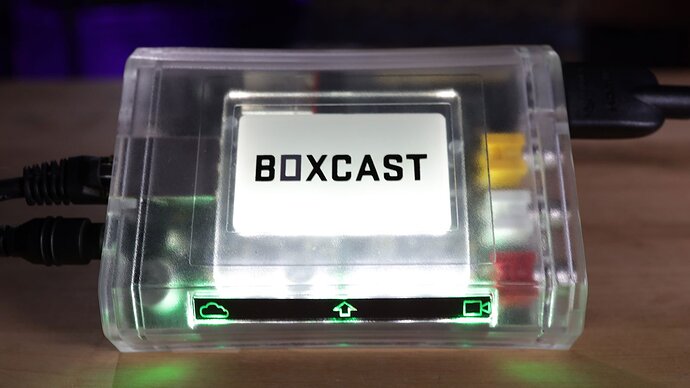 The BoxCaster is a dedicated video encoder developed to meet the demands of video streaming.

Never used them but they have a pretty neat setup!

I lean towards the mac/wirecast solution, but have no clue how to set that up with our streaming provider, which is the only reason I’m tempted to build yet another FMLE PC since we need it for Easter and then deal with Wirecast later

My guess is that you have an RTMP url in FMLE config? If so, all you should be able to do is copy and paste that into wirecast. I guess it depends though, some of the streaming providers do things a little differently

I realize now that wirecast has the ability to easily connect with our streaming provider, however I’m still looking into multibitrate streaming with Wirecast.

As I’m new to much of this, I have a “fear of the unknown”. If my wirecast trial goes well and I can do a multibitrate stream from my laptop then we should be good to go for Easter using Wirecast, as I’d prefer to use a laptop + blackmagic encoder than build a streamer out of a PC and Osprey card (mainly because of cost, but also because of transportability)

Definitely understandable! Its always easier to fall back on stuff you know real well. I havent done a ton with wirecast but I believe all you do is add multiple RTMP streams in the profile. So you would add 1 rtmp stream at 480k, another at780k, etc. Not sure though. I think Jason Lee over at northwoods uses wirecast so he could probably fill you in!

We have used wirecast for years now to do our livestream. We used to be on a Wowza server with Ian Beyer, but moved to Churchstreaming.tv using Yourstreamlive.com. We send multiple bitrate streams out and we use the churchonline frontend as well as broadcast to facebook live too. Churchstreaming.tv guys have a great easy step by step tutorial for setting up wirecast and even will login and do it for you if need be. They also sell Wirecast too and I believe at a discount.

If you have other questions let me know.

Does a person start/stop wirecast, or do you have it scheduled?

Our current system is scheduled/automated. There is no dedicated IT on site during services and I love it that way.

We wound up using a PC with FMLE for Easter since I couldn’t get details from our streaming provider in time to make the switch to wirecast, but I’m still looking into various options.

Our provider does multi-bitrate, but it looks a little choppier than doing the multi-bitrate on the sending-end.

@OneSeventeen currently our process is to have our staff member from IT on site start wirecast.
It wouldn’t require someone being on site, just someone having the ability to start the encoder sending to the provider.
We’ve discussed scripting this but we have found that the check of the audio and video quality is a good final check before we are streaming. Occasionally soundcheck or something runs long so the media team isn’t yet sending us program video/audio at the exact same time each week so this gives us flexibly to adapt to what is happening in the auditorium.

I do know that Josh Leveque at West Side is scripting the startup of wirecast on OSX. We are running wirecast on a whitebox pc that we built.

We send our CND 3 bitrates vs having the CDN divide a single stream into multiple bitrates. This seems to be the most cost effective way for CDNs.